After taking a serious look at my studio: 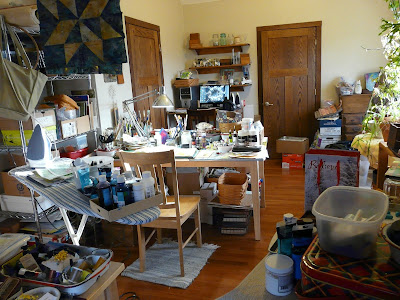 ... I concluded that some serious work needs to be done!  What a mess.  I haven't been putting things away and have allowed the clutter to pile up.  I'm sure I'm the only person on this earth with this problem!!!

A few hours later after simply closing the door to my "problem", I was in the kitchen (very neat and tidy - really!), making dinner.  The recipe I was kind of using had you crisp tofu in some olive oil and make a honey/soy mixture glaze to add after 10 minutes of browning.  The next step was very important:  after adding the glaze, let simmering and REDUCE BY HALF.  That wasn't really in big letters and so horribly important, but it obviously caught my attention.  My doctor told me to lose weight, my family thinks I try to do too much, I have too much on my plate, my art studio is crammed full of mess....  See where this is going?

I think I have found my new mantra:  Reduce by Half.